Schools participating in the Fish Hatching Project have the opportunity to hatch Atlantic Salmon eggs during the winter and spring of the school year.

History of the Project

The Atlantic Salmon Project began in the Central New York area two years ago with classrooms in 6 schools hatching eggs and releasing Atlantic salmon. The first year was a learning experience. The refrigerators did not keep the water cold enough and, as a result, most of the fish died. During the second year, different refrigerators were used and about 90% of the fish survived. During the third year, 95% of the tanks were successful. We think we know what the eggs and sac fry need to survive. They need cold, clean, aerated water. This year we are hoping to equal or improve on our success rate of last year. To do that, we need more schools involved. Are you interested? 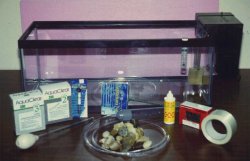 Two hundred years ago Atlantic salmon used to swim in the lakes and rivers throughout Central New York. The Atlantic salmon (not the Pacific salmon) was the native species. However, due to harvesting, dams that blocked migration routes, and water pollution, after 1860 salmon were no longer able to live in Central New York. We are now trying to reintroduce the Atlantic Salmon into its former habitat. The lakes and rivers aren't the same anymore, but we hope the salmon don't notice the changes. 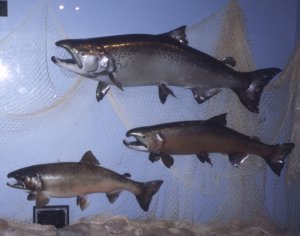 The answer depends on what you want to learn. Some teachers use the salmon project to teach about life cycles. Some use the salmon to teach some local history, such as population growth, industrial growth, and water quality. Some use the salmon to teach about ecology. This project fits very nicely into the elementary, the middle school and the high school science programs. Last year 6 tanks were in the elementary schools, 7 were in middle schools, and 7 were in the high schools. All of the activities in the Teacher's Guide relate directly to the New York State Core Curriculum. 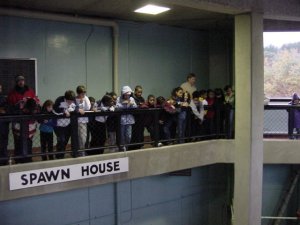